16 November 2020 A day that was a blast! Space Studio West London students build mini rockets during workshop organised by boss of Starchaser

Year 10 and year 12 students from Space Studio West London were given the opportunity to learn from real-life rocket engineers as they constructed their own mini rockets.

The workshop was led by Steve Bennett – managing director of Starchaser – and involved a total of 65 students from year 10 and year 12 building and launching their own rockets.

Steve explained “These kids are the scientists and engineers of the future, so it is essential that they have these opportunities and experiences.”

Alongside successfully building and launching rockets since 1992, Starchaser engage with schools and STEM curriculums to inspire and prepare students for their future careers in these progressive industries.

The workshop began with an introduction to Starchaser and what they do, allowing the students to learn about the background of rocketry and engine testing. Students were then split into teams of 3 where they followed instructions to build their own small rocket.

The rockets were later launched into the air via remote controls using real rocket fuel, resulting in a real rocket take-off involving both fire and smoke! Parachutes were deployed to allow the rockets a safe landing back on the ground. 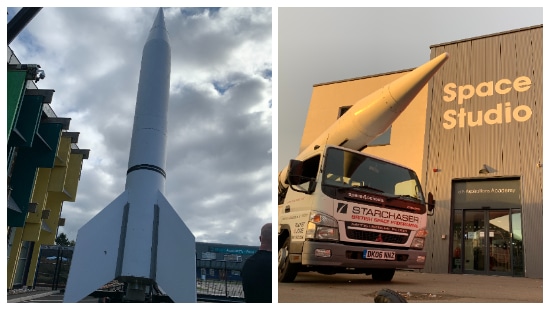 Year 12 student D’Jon Miller says “The part of the workshop that really excited me was having the chance to build our own rocket.

“Once Steve told us we would be doing that, I already knew it was going to be a blast!”

D’Jon said he was grateful for the opportunity and was not left disappointed, revealing:  “I loved the rocket workshop – it was really intriguing and something that was completely brand new to me.’’

Steve recognises the importance of students having these opportunities and experiences during school: “So many people are not encouraged to explore these fields of study and work.

“It is vital that we continue to introduce students to rocketry and space at a young age and encourage them to pursue it in their future.

“Engaging in these opportunities is needed for the country to keep learning.

“It is more than just building rockets – the workshop was an exercise in teamwork and collaboration.

“The students practiced and developed valuable skills that they will carry with them through life.”