From an eco restaurant to a go-karting track or animal sanctuary, students at one local school recently unveiled their plans for the derelict athletics ground where Olympic champion Mo Farah’s promise was spotted.

Students at Space Studio West London were tasked with coming up with business ventures
to transform the disused track and stadium at Feltham Arena.

The facility, located near the school, is currently being regenerated by Hounslow Council
under the Feltham Masterplan and provided the perfect opportunity for students to reveal
their entrepreneurial skills and showcase their ideas.

The project, included as part of the Aspirations Employability Diploma which is unique to the
Aspirations Trust, saw Year 12 students split into nine groups with four to five students in
each.

The aim of the diploma is to equip students with the attributes needed to thrive in the workplace. Creativity, teamwork, problem-solving and communication are key skills they acquire during their real-world projects.

Once each group had selected their idea for the site, they researched, created a scale model and put together a presentation for a panel of judges.
The all-female team behind the Green Roof restaurant were declared the winners. The collaboration between Vanessa,16, Kainat,17, Jannat,18, and Renee,16, to create a dining space complete with grass and flowers on the rooftop to boost the local economy left the judges impressed with their thought process and attention to detail. They were each awarded a £25 Amazon voucher. Separately, student Cheyenne was awarded a £25 Amazon voucher for her enthusiasm and creativity when working with her team. 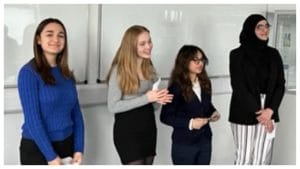 Steph Lee, Careers Lead at Space Studio West London, told the Hounslow Herald: ‘’We chose Feltham Running Track as the site to redevelop as it is part of the Feltham Masterplan and provided a good opportunity for the students to think about the impact of their project ideas on the local area.
Every single team saw all members participate and collaborate over key roles whether it was project managing, research, looking at how planning permission could be acquired or any legal issues that may arise.
‘’The purpose of the Aspirations Employability Diploma is to encourage our students to develop the key skills employers are looking for in the workplace today.
‘’Ideas put forward for the site included a water park, radio station, a go karting track, animal
sanctuary and the Green Roof restaurant.’’ 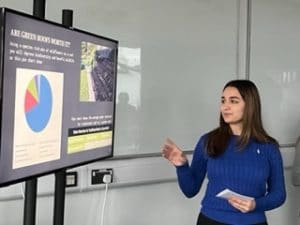 Revealing why the Green Roof restaurant won, Mrs Lee said: ‘’The judges commented collectively that It was the attention to detail shown by the team in order to make their idea work and also when producing the scale model, which was so impressive. Their presentation was also really good: they spoke directly to the judges. The judges all commented that the group was highly professional and they answered the questions from the judges confidently. It was clear a lot of research had gone into the project to achieve the final result.’’

Commenting on their achievement, Kainat said: ‘’All of us in this group are new to Space Studio West London and this project allowed us to get to know each other and develop a strong friendship. My communication skills have definitely improved.’’

Jannat said the idea for the restaurant came about due to the lack of dining out options in
Feltham: ‘’When you go into central London there are so many options when it comes to dining. The aim of the Green Roof restaurant was to create a destination site in Feltham – a venue tourists and locals would want to visit.’’
Vanessa added: ‘’It was also important to us that the project was environmentally friendly and also increase employment in the area. It’s great to have won and we’re all thrilled.’’

Feltham Arena is where Mo Farah’s talent was honed and developed. The Olympic double gold medalist joined residents and politicians in campaigning for the track and stadium to be improved after the venue became derelict and run-down.
In 2016 Hounslow Council launched a Feltham Arenas Parklands Masterplan to rejuvenate the space.
The two-phase project aims to improve the infrastructure, safety and accessibility of the area. The final goal is to establish a sports and activity hub at the site.