04 February 2020 THEY CAME, THEY SAW AND THEY LEFT IMPRESSED: INVENTOR OF ARTICULATE! & ROYAL SOCIETY ADVISER CHOOSE WINNER OF THE GAME AND GIVE PROJECT SEAL OF APPROVAL

They came intrigued to see what would unfold before them – and did not leave disappointed.

Andrew Bryceson, inventor of the multi-million selling board game Articulate! and Kelly Smith, Senior Policy Adviser for Education at the Royal Society have given The Game the thumbs up.

The event involved teams of Year 12 students from schools across the Aspirations Academies Trust working collaboratively to design a board game that has the potential to be manufactured and marketed.

The groups were whittled down to six teams chosen to attend the multi-academy trust’s headquarters in London for the final and the chance to clinch a national prize.

In the end it was the teams behind Where’s Korey? And Grounded – both from Banbury Campus Sixth – that found themselves vying for the top spot. 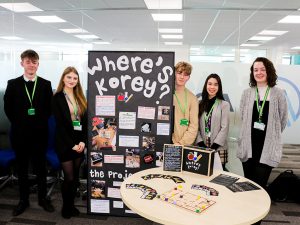 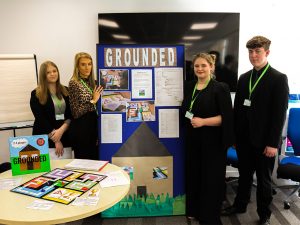 Both games were inspired by Cluedo with Where’s Korey? Centred around a student named Korey who tries to leave school and faces teachers trying to prevent him.

Grounded is aimed at teenagers and parents with questions based on real-life situations.

Mr Bryceson thought the questions in the cards for Grounded had the best commercial potential in terms of making a connection with an audience.

Ms Smith told the Banbury Guardian: ‘’From my perspective the whole event was brilliant. The Royal Society is interested in how we can encourage a broad education in schools. I was interested in the project-based learning of The Game and it’s a great way of linking cross-curricular learning and for students to bring their own interests and strengths to the project.

‘’Where’s Korey? Really stood out for me. I liked how they worked well together as a team and the game was professional and eye-catching.’’

Mr Bryceson said: ‘’The event was fun. I didn’t know what to expect [when I was asked to judge] but there was an awful lot of work and creativity there.’’ 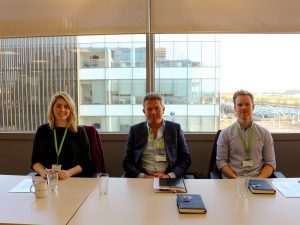 Lewis Walsh, Iga Kazermiak, Emmy Lawrence, Scarlett Reading and Luke Kench are the students behind Where’s Korey? They were each handed a £100 Amazon gift voucher.

Iga said the team was thrilled to have won the top prize and to have their hard work recognised.

He said: ‘’The judges were very good and friendly. The Game has helped us develop  strategy and adaptive thinking skills. I also realised how important it is to be open-minded because you don’t know what you can achieve and create – the only person that limits you is yourself.’’

The Game is a No Limits curriculum project, designed to increase the employability skills of students.

Designing a board game introduces students to the concepts of analysis, design and marketing.

Students pitched ideas and worked in teams in a similar fashion to those who take part in TV programmes The Apprentice, which is fronted by multi-millionaire businessman Sir Alan Sugar, or Dragons’ Den.

The Game is a prime example of the power of No Limits – which is unique to the Aspirations Academies Trust – to encourage children to learn by pulling together several different subjects and show how they all link in.

Dr Catherine Pickup, Director of Project Based Learning at Futures Institute guided the Banbury teams, she said: ‘’I’m very proud of them [the Banbury Aspirations teams]. The Game illustrates that you can have strengths and weaknesses but if you’re working towards a common goal you can produce something incredible.’’

Securing a place at university or contemplating the future after leaving school can be daunting for teenagers. But for students at Space Studio West London,…

A rabbit, hamster or even a therapy dog, are the pets of choice in most schools. At Space Studio West London, pupils have two geckos,…

From an eco restaurant to a go-karting track or animal sanctuary, students at one local school recently unveiled their plans for the derelict athletics ground…