07 January 2020 HOW I TEACH FACT AND FICTION TO A-LEVEL STUDENTS: CRISPIN KNILL’S LITERATURE STUDENTS WERE STRUGGLING UNTIL HE CAME UP WITH A NOVEL APPROACH

Crispin Knill is assistant principal at Space Studio West London. This article was published in the TES.

I am sat at the back, because that’s where you sit when you want to take a back seat in something.

It’s not my limelight.

The playwrights are arguing, the actors being manipulated across the stage, sometimes mentally, sometimes with a guiding hand on a shoulder, by people that are their shadows.

Except, they keep talking about Top Girls in their essays as if the characters are real people, as if the play’s opening scene is an episode of I’m a Celebrity…

They need to know that this is a fiction, and an intentional one, and that the characters are meant to do things and be things that are reflections, not realities.

So it is a project, and it is a project in a school that, since we opened our doors nearly five years ago, has had project-based learning at the forefront of its curriculum.

We have big, year-group wide non-curricular projects, but we have also always wanted to use projects in the classroom to support and advance discreet, endpoint-assessed subjects. Working as a group

So here I am, in the back of an A-level lesson where students are teaching Year 11 students a 21st-century feminist play that they, as a writing group, had written.

In realising their vision, they trained themselves to work as a group, and also had a taste for communicating that idea to others. Their essays changed immediately.

It was as if they were now wearing a pair of glasses that separated them from the characters in the play. The lens they looked through was suddenly the author, and they began to question Churchill’s motivations because they themselves had experienced the process of realising their emotions.

We saw a similar problem in Year 10. Students were studying The History Boys, and they were talking about the characters as if they existed.

We saw the problem clearly when we recalled exam scripts. We found that students had failed to engage with the writer’s craft sections of the mark scheme. With a change in year group came a change in approach.

These students needed, like the sixth-formers, to understand that the subject matter was a fiction. This time we engaged with the engineering work they were already doing and had students build set models for the staging of the play.

We took some examples from a trip the students took to the V&A Museum and put skills into practice. I got to use some of my own practical skills from a former life repairing boats for a living, and it also meant that students got more time to play with the subject in a physical way.

But, again, we found that the benefit of the exercise was in the application of an attitude to their study. They could now see that choices were being made in the development and setting of the text on to the stage.

Discussions took place about the “right” way for the school to look, and they realised that, for Bennett, that was likely derived from his own schooling, as well as that contemporaneous to the period he was writing in.

In praise of projects

The process for each of these two examples has come from the observation of real issues in the students’ working methods, not just the fluffy idea that “projects are fun/good/a great way to engage students”.

Everything has been defined by an achievable impact and this was developed in defiance of the stigma. Our greatest critics were our greatest friends because they made us see the potential flaws in the teaching method even before we opened the doors on our first day.

As a school we have embraced this process. We’re not experts yet, and I’m not sure that you ever truly can be; the world and its demands of students change too rapidly for that.

However, what we have experienced is now providing valuable insight into the trust-wide roll-out of applied transdisciplinary learning into multiple year groups, in multiple schools. 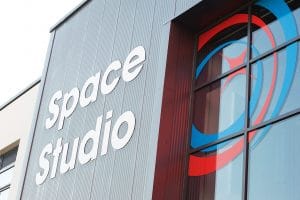 As secondary schools prepare to welcome back small clusters of students this week, Space Studio West London have outlined the changes that they have made…

MEET THE SPACE STUDIO STUDENT WHO REFUSED TO LET LOCKDOWN SCUPPER HIS SCHOOL PROJECT AND REACHED OUT TO A BAKER IN INDIA FOR HELP!

When Andomski Rodrigues discovered his work experience had been cancelled due to the coronavirus outbreak, he could have easily resigned himself to the circumstances he…