Sixth Form students at Aspirations Academies Trust schools in west London resumed their annual trip to NASA for the first time post-Covid – and had a blast!

The recent half-term break saw pupils from Space Studio West London, Rivers Academy and Park Academy sampling the delights of the Johnson and Kennedy Space Centers and the real, life-size versions of the Mercury, Gemini and Apollo rocket capsules.

The itinerary also included talks designed to provide an insight into life at NASA and included an afternoon with Ginger Kerrick, NASA’s first female and Hispanic flight director.

She gave a talk about her journey towards her senior role, recounting her experiences, struggles and triumphs during her long and extraordinary career.

Networking dinners were also organised to include conversations with NASA scientists and engineers to inspire students to pursue a career in the space industry. 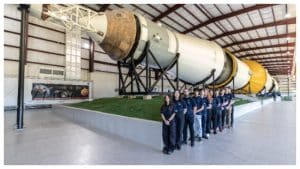 A visit was also organised to the George W.S Abbey rocket park where students met Matt Gillilan, a member of NASA’s SWAT team. The students were also left in awe at the sight of important assets on display including three launch-ready Saturn V rockets left over from the Apollo program which was cancelled in the early 1970s.

The final day of the week-long trip involved a tour of prestigious Rice University and a lecture about the habitability of planets and how to spot them.

Space Studio West London is a STEM (Science, Technology, Engineering & Maths) school and currently has places available for Year 10 and Year 12 students for the academic year beginning September 2023. Head along and see the school and enjoy a tour during an Open Evening on Monday November 7th which begins at 5.30pm.
The evening will also include an engineering challenge to give students a taste of school life at SSWL. To register your interest, email: office@spacestudiowestlondon.org. 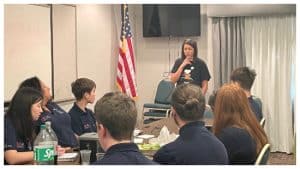 Commenting on the highlight of her trip, SSWL student Kainat Saeed, 18, told the Hounslow Herald: “Being able to have a networking dinner and a conversation with some engineers from Lockheed Martin was inspiring. I got the chance to converse with Alicia MacDonald who is a Space Engineering Leadership and Development Program member currently supporting Environmental Control and Life Support System research. We talked a lot about Alicia’s job and the amount of hard work she put in to get to where she is which was truly motivating to hear. It was interesting to discuss how important Alicia’s role is in maintaining the internal environment and how imperative it is for the health of the crew.

“The day after, I got the chance to talk to Richard Lee, also at Lockheed Martin, over another networking dinner and I told him how I may be planning to do something in the health department as a career and he introduced me to the idea of space medicine which I might be considering now as a future career option.” 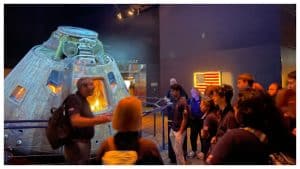 The NASA trip is organised under the trust’s Space Education Adventure programme and the selection process for a place on the trip is competitive.

Students are tasked with making a presentation and also completing a number of science-based challenges when deciding who will earn a place on the trip.

Space Studio’s principal, Andy Morgan, said: “The annual trip to NASA is one of the highlights of the academic calendar. Our students at Space studio are delighted it has returned.

“It’s a great opportunity for the students to meet leading experts in the space industry and go behind-the-scenes at Johnson & Kennedy Space Centers. Students will also have the chance to gain a better understanding of new and upcoming programmes currently being worked on. The selection process for a place on the trip is highly competitive but it is a rewarding experience.” 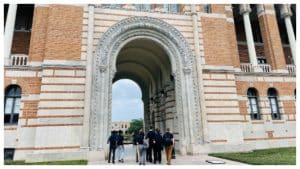 Space Studio West London is home to 300 students aged between 14 to 18 and class sizes are kept to no more than 25 pupils. There is an emphasis on one-to-one learning and a teaching model that aims to nurture the engineers, scientists, inventors, entrepreneurs and aerospace experts of the future.