The ability to think outside the box and combine creativity with science. They were skills on display in abundance during a recent engineering challenge at Space Studio West London (SSWL).

The STEM-focused studio school for 14 to 18-year-olds currently has places available for Years 10 and 12 for the academic year that begins September 2023.

The challenge is an annual event at the school and is an opportunity for children in the local community who have a passion for designing, testing and building to get involved.

This year’s challenge involved making a helipad and was combined with an open evening to give teenagers a flavour of school life at SSWL. 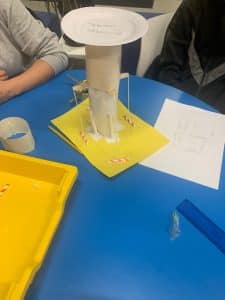 Andy Morgan, Principal at SSWL, told the Hounslow Herald: “At Space Studio West London we believe in learning through doing – SSWL is a school where there is an emphasis on project-based learning and the helipad challenge provides a good insight into the shape of the school day.

“The aim of the challenge was to make a helipad that could hold 1kg in weight and everyone who took part was given the same materials including a lolly stick, straw, paper, string and a paper plate. It was a great exercise in combining creativity and science and was a chance for those who attended to show their planning and logic skills.”

Space Studio West London is home to 300 students aged between 14 to 18-years-old who regard the academy as the final frontier for a top class education with a focus on STEM (Science, Technology, Engineering & Maths). 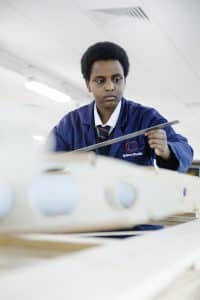 There is also an emphasis on one-to-one learning and the school’s innovative teaching model allows students to be nurtured into the engineers, scientists, inventors, entrepreneurs and aerospace experts of the future.

Could SSWL be the perfect school for your child? Find out at the next open evening which takes place Monday December 5th from 5.30pm. To register your interest or to find out more, email: office@spacestudiowestlondon.org.

Annual school trips include a 10-day US visit to NASA which provides students with an experience that is out of this world. Included in the itinerary are behind-the-scenes visits to Johnson & Kennedy Space Centers, where students liaise with scientists and engineers.

There are also plenty of opportunities for talent to flourish: Student Suvarunika Thirumaran, 17, was awarded a ‘Most Ambitious’ TEDI-London award after participating in a Thinking Ahead: Light Up! Programme.

Suvarunika does not hesitate to credit the support from SSWL for her success, revealing: “Space Studio West London opens doors in a way that other schools don’t. There is so much support and that has really helped with my confidence and made me believe in myself more and not shy away from tackling projects or trying subjects.’’

Space Studio West London’s resources are extensive and varied: highlights include the flight simulator rooms and the fully equipped engineering room including CAD/CAM.

Close links with employers in the aerospace, science and technology sectors support students well with preparation for their future working life. Surrey Satellite technology limited, British Airways, BP, Heathrow, the National Space Academy and National Physical Laboratories are just a handful of the businesses they work with.

Principal Andy Morgan said: “Space Studio is a calm, safe and productive learning environment where pupils work collaboratively with each other, their teachers and industry mentors. Expectations are high. Opportunities for project-based learning with industry professionals, and work placement are numerous.’’